No matter how far I run, my past is always 2 steps behind me. I tried to forget the chaos that I was once in, but I found myself thinking of it ever since I had that dream of Borage Christmas night.

I thought I saw him… Tyrese. My tormentor since my childhood. He appeared in my dreams and I thought he was outside of my window. I know it can’t possibly be him but I feel like someone is watching me, lurking in the shadows that surround my house.

My paranoia gotten the best of me and I decided to relocate to a new house down the street from my mother’s. Somehow being near her makes me feel safer in a way but sometimes I’m unsure still. I still feel Tyrese’s eyes on me. It’s been 3 months since that dream.. Most of it was nice.. It felt so real, if I could stay in that dream forever… I wouldn’t mind. It’s not like my life was ever been good. Nothing but chaos and torture.

I haven’t told Borage the full truth about my past life back in Monte Vista and my reasons why I wanted to take things slow. If I would have known he would be in a coma one day, maybe I would have let him kiss me at least. But know I sit here with regret, wishing I would have told him how I felt about him before his accident.

He’s been in a coma for nearly 4 months now. Sometimes I wonder if he’ll ever wake up.. What if he doesn’t? Should I move on with my life? I spend hours pondering those questions. I haven’t talked to my mom about this, she’ll probably think I’m insane for falling for a man in coma.

The new friends I made here wonder why did I leave Monte Vista, it’s such a beautiful town in Italy. Open country side fields, cheesy pizzas, friendly people wasn’t enough to keep me there. If they only knew how my life was then they would understand why I left, landing thousands of miles away from a place that I felt was home.

I didn’t have the average Italian style family like others would think. It was anything but.. Well.. in the beginning it was, however I was too young to remember such a time. I was the only child between my parents, Antonia and Muraco. We lived in a house south from the city of Monte Vista in a small country town called Canosa.

I don’t have much memory of my dad. I’ve seen pictures of him, but that’s about it. All I know that he was a special lycan, a silver back. He had ivory skin with silver white hair. He was named Muraco meaning “white moon”. It was perfect since he was born during a full moon, reasons why he was born a silver back. I got my silver highlights from him. My dad was a lone wolf though, he didn’t belong to a pack, in fact he was against packs.

I’m not sure what was his reasons but my mom said since my birth he shown an extreme dislike against packs when he was bothered to join the South Canosa pack. Since my mom was human, my dad would have to leave me behind if he join. My mom said he adored me when I was little. It would have been nice to have a man who adored me when I was growing up. My dad’s life was cut short, my mom was told that he was killed. However this stories about his death doesn’t add up…

If my dad never “died” then I would of never fallen into the cold arms of Tyrese Rizzo. I still have memory of his  glowy ice cold gaze..With Borage away in a coma, my painful memories have returned.

The memory of the day that my life was destroyed echo in my thoughts…..

I need to move forwarded with my life now.. Not think about the past so much but think about my future. I enrolled myself into the community college, majoring in child psychology. I had a screwed up childhood, maybe I can help a child heal from their pain so they wouldn’t have to live the life I did. Maybe I can finally heal myself as well.

While I’m in school, I still give private ballet lessons to young kids at the Acrylic Rhythm studio. Recently Borage’s son Mordecai hired me to give his daughters Mariah and Kimora lessons. His daughters are a joy to teach, Mariah is such a sweetheart, her kindness reminds me a lot of her grandfather’s.

“I’ve been practicing a lot!”

“That’s good. You should keep practicing anytime you can.”

“I hope I can be in a ballet soon. Have you ever been in one?”

“Yes, I’ve been in many. If you keep improving, I just might sign you up for an upcoming ballet.”

Mariah was happy to know that I thought she’s almost good enough to be in the spring ballet. Teaching the girls do keep my mind off of certain things. If only it kept my mind off of it for good.

It wasn’t long before I started to spend a lot of time with the girls. I started to take them out for dinner at my mom’s restaurant once a week after a lesson. Sometimes I take them to the park or let them hang out at my house. Morde started to let me have them on the weekends sometimes. I take them out shopping, or to the salon to get their hair and nails. Mainly a lot of girly type of things. Sometimes my mom give them cooking lessons if I bring them to the restaurant.

Over the weeks, I started to form a close relationship with the girls. Liam commented about it was a good thing seeing how the girls needed a motherly figure in their lives. Children were something that I wanted in life.. Something I sometimes don’t think it would ever happen. But since starting a new life in EC, maybe I will get that chance.

But wanting to be involved with a comatose man, its impossible..

Sometimes Kimora’s temper tantrums snaps me back into reality. She’s a fussy one at times. Do I really want kids?

Temper or not, I love children regardless. I learned that she just has a dislike towards pumpkin pie. She wanted some of my mom’s famous key lime like Mariah had but my mom felt that would be too tart for her little taste buds. Mariah let her have a taste and Kimora loved it.

Mariah cut her piece in half and gave the other half to her little sister. I never met a sweet and caring child like Mariah. Most kids her age wouldn’t think to share their piece of desert with a younger sibling. Mariah didn’t mind, she wanted to make her happy. Another reminder of Borage, he did whatever he could to make me happy. Why did I have to give him such a hard time? Then again the things he say were thoughtless. Too much thinking with his other head.

I spend a lot of time at the hospital with him, usually after his family has left for the day. I miss the warmth from his body, the softness of his skin, the sweetness of his scent. I curl up next to him, placing my head on his chest. I listen to the rhythm of his heartbeat while whispering my pleads for him to awake. Every night is the same, nothing. He remains silent in his slumber.

Then awake to a sour turmoil reality… 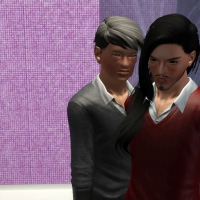 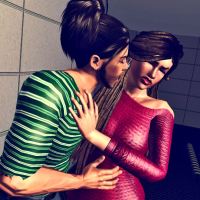