So there might be a slight delay on update from the main stories. There was a hiccup in my game and there’s a lot of damage control to fix before I can really do anything.

I tried out this one beautiful world called Chinatong Village and did a photo shoot there.

Pretty isn’t it? …Well this fuckin’ piece shit came with this…

That fuckin’ Arezzo counter. If you don’t know already, that is a corrupted CC that can harm your game. Now this world is supposedly empty and CC free. But yet I see other than the Arezzo counter a few other things were attached to the world..

Not sure if that other stuff is on the bad CC list but it’s clear to say, I’m avoiding that creator and probably just set that person on fire…

After uninstalling the world the fuckin’ counter remained in my launcher! I had no choice but to clear my DCcache and reinstall all of my sims3packs, twice (I have 2 accounts on my computer, Legacy play & Freeplay. I use different mods, and different age spans, so I need 2 accounts) all on the night of my birthday (Tuesday). That wasn’t how I wanted to spend my birthday.. Fixing this damn game >_<

Having to reinstall sims3packs means all of the cap patterns I used were reset… And I used them a lot, on sims, in homes, and just a few lots >_< That’s my damage… I have to recolor pretty much.. EVERYTHING! So there won’t be much story updating until I undo all of the hurt. To save myself from future error, I got rid of the cap patterns and stick to the package format patterns. I lost a bunch of cute patterns now BUT I just replaced them with 162 new one patterns.

And to add salt to injury, the game replaced all the stuff from Lucky Palms with base game shit! Mind you LP was installed >_< I had a lot of shit to fix in Borage’s house. Plus I will have to fix some of my com lots >_<

Tonight I just installed LP 3 times on top of itself in hopes the fuckin’ game will get a hint and see that LP is installed!!! Sometimes with store worlds, you gotta install it a few times on top of itself so the game gets a clue. So fuckin’ annoying! I almost dread opening any of my saves at the moment knowing there’s a lot of work to do.

Well Brielle did break CAS that one night…

As I was in Borage’s file, I did get to dress up Eli with some new clothes.

He got a little hat to cover his bald head. He doesn’t get any hair just yet 😉

Borage did get to bond with his little baby some…

I may end up avoid my loading my game for while.. I did find something to keep me busy. I got my hands on creating artwork for the game.

The disco pic is actually one of my original art I made about 2 years ago. I’ve been thinking of pulling out some of my artwork and put them in the game 😀 I do plan on sharing once I create a set of photos. It’s quite fun and not too difficult to do.

Of course Borage was excited to see himself LOL

I do plan on making some posters of Borage to share haha.

I will do 2 more life updates in the meantime but as for main story updates, it may be some time before I do

I’ll leave you with this 😀 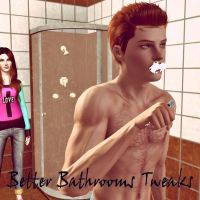 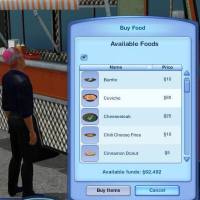 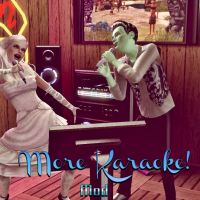