It’s been too damn long since I last been myself. I gave a lot of myself up just for one lady. That same lady destroyed my heart and trust. I will never love again. Not if that’s how love works. I gave a lady my heart and she fucks my dad then had me raise his baby as my own. What kind of shit is that? After my trip to Lucky Palms to see my sisters and cousins, it was time to get back to my old self again.

During my time in Lucky Palms, I met a fairy lady named Diamond. I seen her face flashed in my dreams before. Apparently I had met her before and fathered a set of twin girls but I have no memory of ever meeting her. I saw a photo of the girls, and they are most def mines. My hair and facial features on the twins were strong. I had no idea I had 2 extra kids whom I never met before. I feel like a ass for not remembering her. How could I forget a pretty face like hers?

She tasted amazing.. How could I ever forget something like that? Was I smoking cracking? Pot, yeah. Crack.. no?

However things weren’t too great when Diamond had a encounter of the ghost of Lois. I finally got to confront her about her involvement with my dad who I longer wish to claim as a parent. I let her know that I was done with her. She did the worst thing ever. She lied to me. I know I did my shit, but I confessed, I owned up to it. But Lois, she was a snake… Spineless and cold blooded.

As I settle in my new city, Brooklyn Heights. I wanted to try something different. I got a Japanese grill after seeing my cousin Rio’s. Instead of using my magic, I actually cooked a meal. I’m a pretty awesome cook I must say.  If Diamond ever came into town, I wouldn’t mind cooking her a meal to show off my awesome skills.

I’m up to 3 G-babies now. Little Alyssa is a teenager now, Mariah who is Mordecai’s oldest just started Kindergarten this fall. And the youngest is Kimora, Mordecai’s youngest kid. I like the kids and all but I’m still not taking the “grandpa” title. I’m still too young and sexy for that. My oldest g-kid isn’t too bad. She does her homework and chores around the house. L2 stays on her about keeping up with her grades and chores. She’s a good kid and we don’t hear any lip from her. She likes to play video games and read in her free time as well look after her 2 little cousins. I’m pretty proud of Ms. Lyssa. She does her have moments where she’s depressed. I think it’s cause of her druggie mom, Ashley who nobody know where she went. I told L2 to leave that hag alone.

Mariah is my little buddy. She does remind me of her mom eggroll a little. Morde had been fucking panda bear for some time before she magically got old, ugly then died. Mariah doesn’t ask much about her mom now days. She’s gotten so use to living with me. Morde doesn’t pay attention to his girls much and Mariah ends up calling me “daddy” instead of “G-Daddy” or “Daddy B.” I don’t mind it in public, I don’t want the fine ladies to know that I’m already a g-parent. Mariah usually go everywhere I go. I like having her tag along with me.

Kimora, the baby is about a year going on 2. She reminds me a lot of BL at that age. He isn’t too thrill about his sister-nieces and haven’t make a attempt to ever see them. I think this baby has been stealing my drinks that I set on the coffee table. This baby is gonna need AA before Pre-K. Kimora is mostly a cry baby but rubbing some rum on her gums does the trick and knows her out. She’s teething again. I think rum will be her choice of drink.

Of course Mordecai moved with me since he now have kids whom he doesn’t pay attention to. He’s clueless about fatherhood. I know I wasn’t the best but I sure in hell did better than him. Mordecai leaves it to L2 to care for his girls while he goes do whatever. He was once in love with BL’s mom but since she got old and died suddenly, Morde just gotten weird.

Pedro came along mainly cause of Aries. Aries wants to stay close to me and naturally, Pedro wants to be near him. He blames himself of why Aries is the way he is. Aries has panic attacks and is emotional mess. He caught the house on fire back in Starlight Shores while he was having his attacks. Apparently I wasn’t there and haven’t been there for so long. I’m not sure where I was but the fire not only damage Aries’ life but my cupcake, Lotus Rae’s life as well. Rae has scars all over her body from head to toe. I feel awful that I damage my baby girl.

And Boragio came along. I don’t know what’s his deal is but he didn’t get that craziness from me. Barking like a dog randomly and yelling for no reason. He’s from a whole other planet. However he’s been this way since his mom died.

L2 came along mainly cause of Alyssa. She loves her Daddy B.

Alyssa suggested that I should get a cat to help with the depression that I was having as I grieved over 2 losses. The cat helped, she’s cool and all. Her name is Sassy but doesn’t seem to like Aries that much. And it’s issue. Every time Sassy chases Aries, I have to hug and comfort him. I got him into painting, hoping that will help with his attacks. Painting should help him relax.

I’m glad I got the cat. I think I may of gotten her for Mariah. They have a field day just playing around all day.

I didn’t think I would embrace grand-parenthood as well as I did. It seems a lot more better than actually having kids. My G-kids may live with me but it’s still not I’m basically raising. Teaching my drunken g-baby Kimora how to walk was kinda fun. I remember when her dad took his first steps for me as well as Mimi. I kinda miss those days but I’m glad it’s over. I’m not having anymore babies. Boragio was my last now that he’s 18 years old.

I get to do all of the fun stuff like take Mariah to play at her playground after having ice cream. I treat my Muffin with the best.

L2 talked about he doesn’t enjoy moving here so much. He talked about how he was abducted a few times. Maybe he shouldn’t be outside at night.

Although Pedro lives with us, I don’t see much of him. I’m not sure what’s he up to nor do I care. As long as he’s not putting anymore babies in me, I’m good.

“What are you doing? Who are you? How did I get here?”

“Log#1: This is Peidax Xip reporting from Brooklyn Heights, Earth. I have began my 50 hybrid pollination cycle. I am under strict orders to complete this mission since I refuse to produce another alien-genie hybrid with Earthling, Borage L. Montigo who is of  Navox genie occult. If I do not succeed in my mission, the lives of my 7 children with Borage along with the lives of Fayon’s children are in danger. I will mate or pollinate different females and males in a timely manner. I recently have succeeded in capture two 2 young adult females and imprisoned them. The tests shown they are both indeed healthy. Shelly Knowles is of Witch occult while Harley Combs is of Werewolf occult. I successfully mated with both subjects. Memory of our sexual encounter was erased to prevent distress in order for the subjects have a successful pregnancy. After a body scan, both  subjects shown they are pregnant with my fetuses. I will report again as the pregnancies progress more. – Peidax Xip”

Note: This spices things up a bit, there will be a mini Baby Challenge with Pedro inside of Borage’s Risquecy. It’s pretty much 2 stories in one. Pedro will have to have 50 babies with different sims of a occult to produce alien hybrids to please his Superiors or the Montigo 7 and Fayon’s twins will be killed. Microchips were inserted in each child when they were infants. The microchips are a tracking device and can act like a time bomb.

Although Pedro refuses to impregnate Borage anymore for his job, doesn’t mean Borage is done with alien pregnancies 😉  Borage isn’t done giving birth just give but he’ll have a break for some time. The sims I will be using for Pedro’s mission is sims that the game generate after they had a makeover in CAS. If you are willing to donate, that is great however you may wanna think twice before doing so. There’s more to this story. 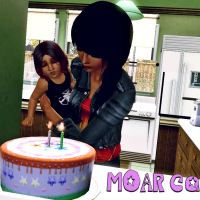 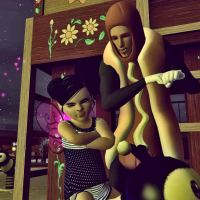 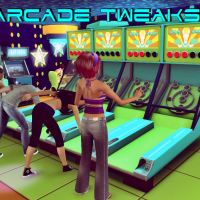