Once the final chapter is posted Montigo Tango is posted, Tango Inferno will start. I will be adding 3 new characters to this story but you get to pick which cousin. These are are Zinnia and Rosette’s kids. Since Borage has his own story and Amaretto Sour will be in another story, they won’t be added to this poll. Tango Inferno won’t be any different from Montigo Tango but with more intense drama. The story will need some humor so that why you get to choose from the Montigo sisters’ kids since they didn’t have the best upbringing.

Acacia is the first born of Zinnia’s kids. Of all of her sisters, brothers and cousins, Acacia is actually smart. Born with the Genius trait oddly, Acacia was the only one who could read. She often looked over her younger siblings until she grew up and left. Acacia usually hides her smarts to fit in her family. Acacia is also a pyromaniac and loves to set things on fire. Acacia often thought about catching the house on fire as a teen. She spent most of his childhood plotting to escape along with her cousin Regret whom she’s very close to. Acacia may have a genius trait but she isn’t street smart and lack people skills like her younger brother Borage. Acacia is often disgusted by her father Max and plots to set him on fire but changes her mind at the last second. Acacia is a occult like Zinnia, Genie.

Dodder is the 4th born and youngest son of Zinnia. Dodder grew up to be a kleptomaniac and enjoys stealing. Dodder is clever enough not to ever get caught. Dodder doesn’t appear to be the thug type and is well mannered. Women love his appearance having chocolate skin, golden hair, pointy ears with orange eyes. Dodder doesn’t claim to be a ladies man like his older brother Borage. Unlike his brother, Dodder knows how to speak to females due to being charismatic. Dodder was the first to be born along with his twin Erica.

Erica is the 5th child of Zinnia. Erica is the most adjusted person of all of Zinnia’s kids. Erica is kind and love nature. Erica has her moments of being a ditz as she often forgets what she’s doing and is easily side tracked. Erica likes kids and hope to have a few of her own. After moving out Erica attended college for some short time. Erica found herself unable to stay focus on her studies but seemed to only care about flirting with guys. Erica is a bit boy crazy but isn’t as extreme as her aunt Rosette. But like Rosette, she can get aggressive towards a guy whom she likes.

Glitter Bug is the 5th child of Rosette. Glitter Bug is the first occult child Rosette had, being born a fairy. Rosette wished to be a fairy when she was pregnant with Glitter Bug and her twin. Instead of Rosette, her unborn babies were born fairies. Glitter Bug strongly believes she was meant to be a witch. Glitter Bug tries to convince herself that she can cast spells on others like a witch but fails. This doesn’t stop Glitter Bug into believing she’s a witch with locked powers. In the meanwhile Glitter Bug enjoys pranking Rosette with the same prank over and over. Like her mother and father, Glitter Bug isn’t the brightest bulb in the box. She believes her real parents are the stars in the sky and that’s why she sparkles.

Ghetto Life is the 6th born and only son of Rosette. Finn had a catchphrase of yelling out “Ghetto Life!” and named him that. Ghetto Life is anything but “ghetto”. Ghetto Life is very proper and likes to wear a suit whenever he can. It’s unknown how and where Ghetto Life got his manners and people skills from. Ghetto Life is popular with the ladies with his gentleman act. he thought about changing his name but decided to keep it for irony as he’s a polar opposite of his name. Ghetto Life has his moments of nuttiness being born with the necrotic trait. Ghetto Life tends to randomly pose for a dramatic effect when it’s not needed.

Martini is the second child born to Rosette. Martini’s name alone sounds like a fun drink at a bar. Being named a alcoholic drink, Martini certainly lives up to her name by starting her day with martinis and ending her night with martinis. Martini is nicknamed “Tini” but thought her name was Tiny until she attended grade school. Martini wanted to open up her own martini bar but she starting to drinking up her own money. Martini naturally became to town’s drunk is very proud of her drinking skills. Martini takes a lot after Zinnia and Rosette with partying and random dancing.  Martini doesn’t have much of a IQ and only passed school because the school didn’t want to see her or her sisters back for another year. Martini is a true party girl with no goals or hope of becoming something.

Regret is Rosette’s first born. Her mother frankly disliked kids before becoming pregnant with Regret. Finn wasn’t happy with the pregnancy and told Rosette to name her unborn baby “Regret”. Rosette did so once her child was born. Regret knew right away that she wasn’t wanted and often plot to escape from her family along with her cousin Acacia. Regret was introduced to alcohol as a teen and started to drink til the point of almost blacking out. Regret wrote countless letters to child services about her home living but they felt they were too crazy to believe and ignored her. Regret decided to enroll herself into a boarding school leaving Acacia behind. Regret was only gone for a week and Rosette haven’t notice. Regret aged and Finn bought her and Acacia a house as a birthday gift. Finn told her how she’s “Daddy’s little girl” even the fact he named her “Regret”. Regret turned into a raging party girl, hosting parties and orgies at her house but always knocked out drunk before her parties start. The parties go on without her. Regret is a ditz which seems to be a common trait. 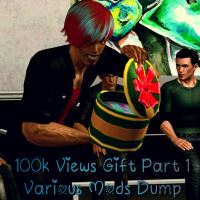