Malix searched feverishly for hour but to no avail of finding Cira. “I can’t sleep! We need to find Cira. I know he’s has her.” Malix shouted. Matius hands Malix a cup of tea that was laced for sleeping pills. He knows Malix won’t sleep but feels that he needs some rest before the resume in the morning. “I know but drink some tea at least.” Said Matius as he hands the tea cup over. Malix takes the cup and sips the tea. Within the hour Matius found Malix fast asleep on the dining room table.  “I’m sorry bro, you need sleep.” Whispered Matius as he lifts Malix and carries him to his bed. “We’ll find her.” Whispered Matius.

It was near and the sunrise began to embrace the city of Lucky Palms. The birds began to chirp while a few people open their businesses for the day. It’s another peaceful day in Lucky Palms, it’s anything but. Malachi carries Cira’s limp body into his shack of a house located on the outskirts of Lucky Palms. “I’m sorry that I had to drain out most of your blood but I can’t have them think you’re alive. Besides my sweet Cira, I replaced some of your blood with mines. Now we can be as one.” Whispered Malachi.

Malachi strips Cira from her blood clothes and undo her pink locks before laying her on his bed. Malachi sat at the foot of the bed and watches Cira as he slowly caresses Cira’s warm leg. “You smell so sweet… Feel so nice. I wonder what you taste like.” Said Malachi as licks his lips. “Mmm.. sweet Cira. Thinking about you makes me wild. I waited so long to finally have you.” Moaned Malachi as he caresses Cira’s thighs.

Cira began to moan as she slowly regains consciousness. “Take your time sweetheart. I think I can wait a few more seconds.” Said Malachi softly. Cira opens her eyes and finds herself in a unfamiliar place and lifts her body half way up from the bed. “Where am I? Who are you?” Said Cira as her eyes focuses on Malachi’s cold face. “Hello my sweet Cira, my name is Malachi Lex… Malix’s birth father.” Said Malachi casually. Cira was stun to learn that Malachi is Malix’s birth father. Cira refocuses on Malachi’s facial features and notice the likeness between Malachi and Malix. “Where’s Malix?!” Shouted Cira as raises from the bed. “Settle down sweetheart. You’re still weak from the drain. Lay back down on the bed.” Said Malachi as he reaches his hand out towards Cira.

Cira smacks his hand away, “Why did you take me?! Where is Malix?!” Cira demanded. Malachi takes a step towards Cira, “Because you are mines now Cira. Don’t worry about my son. He’ll be fine.” Cira steps away and notices Malachi’s glowing yellow eyes that Lei had mention from her dreams, “Did you…. did you killed Santiago and Sakura? Malachi exposed his fangs and growled low, “Oh them…. Yes. I killed them.” Cira began to shake and tremble when Malachi confirmed that he was the one to murder Santiago and Sakura. “Whh..hhyy?” Asked Cira as her voice trembles and her eyes grew wide.

Malachi let out a deep sigh,” Many years ago they did business of a friend of mines back in Bridgeport. The friend promised them a child because they couldn’t conceived one. When he gave them the news that a baby was on the way they were excited. I had no idea that he baby that he promised was the baby that my wife was carrying. When I confronted him about it he denied about his plans to steal my baby and sell him to the Montigos. They were heartbroken when they found my friend killed. My father got a hold of him. The Montigos got information about the location of the baby that they were promised. My baby. They hired someone to break in and steal Malix from his crib. My wife had the back of her head bashed in as she was feeding Malix. Malix was a one away from having his blood purified so he can withstand sunlight for short amount of times. My wife became depressed and made the choice to turn human after the vampire and human riot in Bridgeport. We got a divorce once I found out that she had cured herself and began human. It’s a insult to us vampires. I searched for many years to find Malix and I learned that the Montigos stayed in Lucky Palms were vampires were illegal. I spent many years planning on how to sneak into Lucky Palms and I found away. As long as I live on the outskirts of Lucky Palms, I am fine. I learned that the Montigos had turned my son human and that pisses the fuck out of me. When Jade gave me the location of their business, I shot them dead. Ms. Jade Hendrix has been a big help to me. She gave me what I wanted, to kill them and take you and I gave her what she wanted.”

Cira tried to soak in all of the information that Malachi laid on her, shocked and confused. “Jade? How was Jade helping you? What does Jade want?” Asked Cira. Malachi smiles, “Matius. Jade had obsessed over him for years but Ming was in the way. I met Jade in Bridgeport. I paid for her “services”. We started to talk and I learned that she had special psychic powers. I used her to locate Malix with her powers. She found his location but began obsessed over Matius during her stay in Lucky Palms. When she returned I decided to make a exchange with her. I have a sick grandson and needs special blood to feed on, Jade was perfect. We agreed if she feeds my grandson, locate Malix and his adopted parents, I would help her get Matius.” Cira was a little confused if she found Malix and the Montigos then why did he take her? “Why did you take me?” Asked Cira nervously.

“Ah, you’re the golden goose my dear. Jade could sense something about you. You come from a bloodline of genies, right? She could smell a small trace of it from you. You are the perfect candidate to carried my child and be mines. I have no interest in Malix now with him being human and all. Although Malix still have traces of vampirism in his blood and will occasionally have vampire impulses but still useless to me. I need a pure vampire child.” Said Malachi. Cira notices a open door behind Malachi and makes a run for it.

Cira still weak from being drained was quickly caught my Malachi’s firm hold. “Uh uh uh Cira. I can’t have you running away when I waited so long to have you. I tried to be nice with you and not have you locked up but I can see that you’re a runner.” Said Malachi as he holds Cira tightly against him. “Let me go asshole!” Shouted Cira as she tries to fight Malachi’s hold. “I can’t do that my love. I must taste you!” Said Malachi as he bites down on Cira’s neck. Cira quickly passed out as Malachi fed on Cira’s neck. “Mmm. You’re so tasty Cira. This was the best meal that I had.” Said Malachi as he pulls away from Cira’s neck. Malachi lays Cira on his couch, within a few minutes Cira woke up and tries to escape again, Malachi grabs her and drags Cira into his room.

“Stop trying to leave me!” Shouted Malachi as he throws Cira onto his bed. Malachi undresses himself and makes his way towards Cira. Malachi tries to removes Cira’s underwear but she fights him instead. “Now Love, let’s not turn this love making into rape.” Said Malachi  calmly. “Get your hands off me!” Shouted Cira as she slaps Malachi’s hands away. “Okay, have it your way.” Sighed Malachi as he rips away Cira’s undergarments. Malachi forces himself on Cira as she struggles to get away from him. “You’re not making this easy. This excites him.” Smirked Malachi devilishly as he flipped Cira on her stomach and inserts himself inside of her. “Mmm, you taste good and you feel nice.” Moaned Malachi as he penetrates Cira feverishly. “No! Please! Stop!” Cried Cira but Malachi ignores her pleads.

With the click of a lock Cira was knocked back into reality finding herself locked into a cold and bare room without a window. Cira realize that this isn’t just a bad dream and drops to the hard, cold floor. “No…no… this can’t be! No…” Sobbed Cira. “I hope you’re settle in nicely. I hate to lock you in but you gave me no choice.” Said Malachi behind the locked door. Cira said nothing and began to cry as she lays on the cold ground. “Malix…. I need you.” Cried Cira softly.

Note: How did I get the room to turn white? The game glitched at the right moment. I heard that this happens in Lucky Palms. 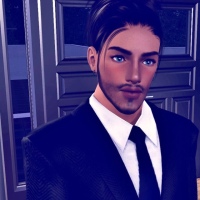